Home » Smartphone Technology » #NoteGate is a Thing. Deal with it, Samsung. 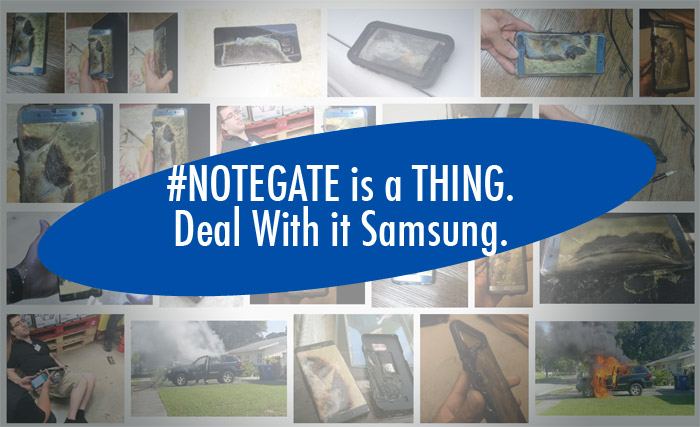 #NoteGate is a Thing. Deal with it, Samsung.

During a recent business flight to the west coast, I was surprised to learn that all passengers were informed to completely turn off there Galaxy Note 7 phones for the duration of the flight if they had one. I had heard about the stories of new Galaxy Note 7s catching fire but didn’t realize how acute the problem was, especially for industries such as airlines. I’ve been using an iPhone for years so I was grateful but also worried myself. After all, smartphones are essentially the same when it comes to batteries and charging, right?

First off, if you are a current Galaxy Note 7 customer or plan to be one, visit this link for recall, reordering and safety details for all Note 7 phones. Samsung has issued an official recall and has officially discontinued the Note 7 as a product. But there are still hundreds of thousands of units out there. Be sure to contact Samsung or your carrier to arrange a safe replacement solution. Remember, there is no guaranteed way to know if your phone suffers from the same issue as the other 92 (and counting) official reports of overheating and burning Note 7 phones, even if Samsung has deemed your replacement phone “safe”.

Samsung has worked hard to develop a great brand with a loyal customer base. By sheer number of total phones, it is the largest smart phone producer in the world. But this #Note7Gate has become a full on media sensation due in part to Samsung’s questionable methods. Details are still surfacing but we can already see some hindsight patterns from just a few weeks ago. Yes they issued a global recall quickly but Samsung did not follow through on formal recall processes in the U.S. that could’ve made the recall go smoother. And to make matters much worse, reports are beginning to surface claiming the new “safe” Note 7 phones replaced by Samsung are also catching fire for no apparent reason. Some of these incidents are isolated, minor events that affecting no one but the owners but others involve airplanes full of passengers and Note 7 owners awakening to their room filled with smoke. This has gone way beyond botched marketing and “my new phone is cooler than your new phone” fanboy wars. It is no longer alarmist to say that more people face injury or death if these devices are not all recalled immediately.

We could dwell upon the fact that timing could not be worse for Samsung. Both Apple and Google have just released new flagship phones that will surely benefit from some phoneless Samsung customers. We could also speculate on the billions in possible lawsuits and brand tarnishing that Samsung stands to lose but this technological disaster could’ve happened to almost any company.

What is behind batteries blowing up?

Samsung, like other phone, tablet, and notebook manufacturer uses Lithium-ion batteries. Lithium-Ion batteries rely on chemical lithium as their primary fuel. Their use is extremely popular in mobile devices because they store energy very efficiently and are slow to lose their charge. Phone manufacturers in particular are driven to continually innovate phones to include more features while not increasing weight or thickness.

Lithium-ion batteries work by storing energy and releasing it through a controlled chemical reaction. Within a Lithium-ion battery each battery has two electrodes where electricity can either enter the battery during a charge cycle or leave the battery. One electrode is called the anode which is filled with ions that are negatively charged. The opposite side is called the cathode has Lithium and positively charged ions. This can be thought of as the minus and plus signs we see on typical batteries. When a battery is being used, lithium moves from the cathode to the anode and when the battery is actively being charged the lithium moves back over to the cathode. Within the battery there is a separator that keeps the anode and the cathode from touching which can trigger an explosion or fire. Since phones are constantly being squeezed to be thinner and thinner the batteries are also getting thinner which brings the anode and cathode ever closer through a thin separator.

Galaxy Note 7 appears to have suffered from manufacturing issues. In all cases investigated so far, Samsung has reported that the battery caught on fire because the anode and cathode touched. This could be the result of consumer misuse or the phone being bent or damaged but investigations into these matters are still ongoing. This could also be the result of Samsung cramming a slightly thicker battery into a slightly thinner case. After all, last year’s Note 5 didn’t suffer from these problems and sported a very similar internal design. We’re talking about fractions of millimeters here so the effects might be obvious but not so much the causes.

What causes the actual battery explosion?

Lithium-ion batteries pack alot of power into each battery and Lithium likes to react to almost anything. The biggest challenges come about with the charging process. Manufacturers need to carefully design the mobile phone so that the heat properly dissipates during a charging cycle. This is controlled through the device’s firmware. The circuits carefully measure the batteries temperature and capacity allowing the charger circuitry to decide how fast and how much to charge the battery. These are critical determinations and if you get any value set even slightly off you can destabilize the internal battery chemicals within the battery causing a thermal runaway which is a series of chain reactions that lead to a fire or explosion. Maybe you have charged your phone and it is very hot outside and you notice an alert that pops up stating that your device needs to cool down. This means that the device is properly calculating the risk and does not want to pump in any further current at risk it could blow up.

Another common problem leading to batteries exploding in mobile devices is poor manufacturing and poor handling of the batteries. Imagine a battery that is manufactured in a poor work environment where too much weight is put on top of it or metal shards fall in. This imperceptible flaw could short a cell of the battery and trigger a thermal runaway. It is important to realize this could also be caused by a mobile phone taking an exceptionally hard fall causing a break between the separator between the anode and cathode. Some battery manufacturers have not inserted a protective fuse that disconnects the circuit of the battery if it overheats.

Tips to Keep Your Smart Phone from Blowing Up

* If you are charging your phone overnight do not keep it on the nightstand by your head.

* If you need to replace your smart phone battery, use only the manufacturer’s original battery

Fortunately, batteries blowing up are not very common considering every mobile device under the sun uses recharging Lithium-ion batteries these days and it is not limited to the smart phone industry. Three years ago the Dreamliner Boeing 787 was grounded by the FAA after there were reports of fires as a result of the Lithium-ion batteries used in the planes. Last year, the hoverboard grew in popularity and a half a million were recalled because of Lithium-ion batteries exploding. Smart phones are part of our daily lives and if we can keep in mind the aforementioned tips, we will minimize the chance we will have our smart phone going up in flames.