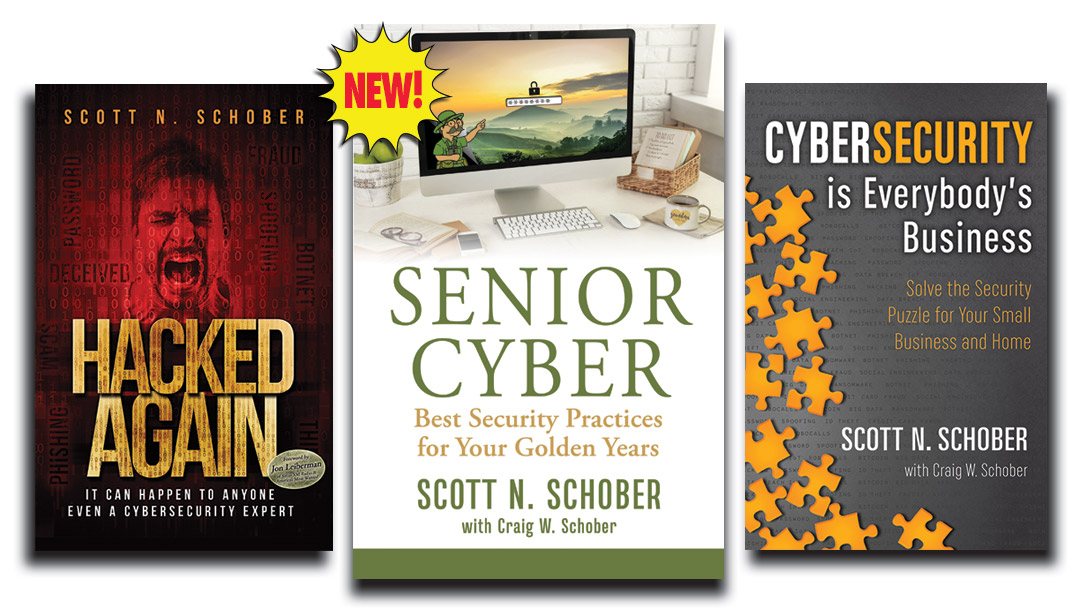 Cybersecurity is Everybody’s Business cuts through the prognostication, scare tactics and news cycle hype to deliver the most imperative guidance for securing small businesses and everyone else they do business with,”– Frank Abagnale, Security Consultant and inspiration for the film Catch Me If You Can

“Schober delivers a timely lesson in both cybersecurity principles and practice by focusing on the largest and most vulnerable target, small business.”– Roger Grimes, Data-Driven Defense Evangelist & Security Expert at KnowB4, Inc.

“How can the little guys  prepare for a potential hack? For starters, they should read Schober’s book – which he could have just as easily named ’The Original Hacker’s Dictionary For Small Business Owners‘.” – Forbes Magazine

“…Bloody good book, now READ it AND PLEASE learn something from it…..AND pass it along to others!”  – Chris Roberts, infamous commercial airliner hacker & Chief Security Architect at Acalvio Technologies

“Hacked Again is a well written book that I recommend without hesitation — especially as a primer for business owners or even government business pros who want to understand what really happens before, during and after data breaches or security incidents that occur regarding your own accounts.”  – Dan Lohrmann, Government Technology Magazine

“…buy them a copy of the book, write an inscription in the cover, and ten days later ask them what they have learned.” – SANS Technology Institute  – Stephen Northcutt

Craig W. Schober is a writer, videographer, and the communications manager of Berkeley Varitronics Systems (BVS). In addition to his contributions to and edits of Hacked Again, Craig works closely with Scott as both a technical writer and video editor and has also worked in the film and video industry for the past twenty-five years, including as the writer, director, editor, and producer of his own award-winning feature films available on iTunes. He also happens to be Scott’s younger brother.

A nationally recognized expert, Scott regularly attends conferences including RSA 2018, FutureCon 2019, SecureWorld and Cyber Investing Summit as a keynote speaker and panel expert. His expertise extends to topics including the future of wireless technology, protection from insider threats, susceptibility to cyber breaches, the impact of drones, and distracted driving technology.

Get all the details to book Scott for your show

Listen to a sample chapter for the Hacked Again audiobook