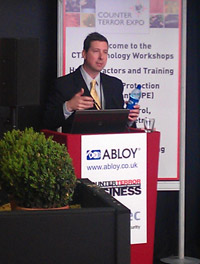 I had the opportunity to spend a part of last week in the U.K. at the Olympia Exhibition Hall and couldn’t help but notice I held a captive audience there at the Counter Terror Expo. Ever since 911, the United Kingdom, one of the U.S.’s most public supporters, has been on their own high alert. And with the 2012 Olympics to hit Londo soon, anti-terrorist planning and strategy has gone into high gear. From no fly zones over the entire city to military snipers postioned throughout strategic areas, London is hunkering down in preparation for a world audience.

With such a live audience comes the ubiquitous presence of mobile phones. Everyone has one and yet these tiny, cheap devices can also trigger catastrophic damage and death similar to the London bombings on July 7, 2005. Now these were all coordinated sucide bombings but at one time were believed to be carried out by cell phone triggers similar to I.E.D. roadside bombings in Afghanistan. At the time, the BBC speculated that the telephone system was shut down by security services to prevent the possibility of mobile phones being used to trigger bombs. Although this option was considered, it became clear later that the intermittent unavailability of both mobile and landline telephone systems was due only to excessive usage.

So how do you secure the greater London area when every cell phone could potentially be used a bomb trigger? I had the priviledge to address some of these concerns at the Counter Terror Expo. One good way to secure an area is to prohibit cell phone use and the best way to enforce that is to wirelessly detect all cellular activity. Unlike cell jamming, passive cell phone detection such as the PocketHound allows police and security teams to not only detect suspicious activity without being noticed but also locate that activity or person. Cellular jamming generally leads to massive wireless outages which creates huge safety problems for those that need help and plays directly into the hands of those that would cause the most harm.So long as cell phones continue to shrink in size and cost, this problem will not be going away anytime soon. Similarly, the demand for detection and location solutions such as PocketHound will continue to grow with the ubiquity of mobile phones.