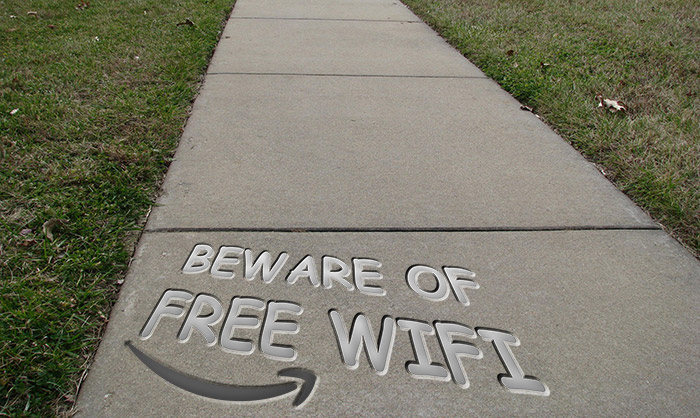 With trillion dollar tech companies leading the charge to piggyback their businesses off of their existing wireless networks, what is the tipping point that free wireless services become socialized Wi-Fi paid for by all but enjoyed only by those locked into a gilded cage ecosystem?

Back in the heady days of 2007, just around the time of Apple’s iPhone introduction to the tech world, Steve Jobs envisioned free Wi-Fi for everyone. The same visionary who once charged $29 USD (now selling for well over $100 on Ebay) for a pack of multi-color iPod socks to protect our precious music playing devices is also the same person who secretly championed the idea of free public Wi-Fi for all. According to famed but now retired tech journalist, Walt Mossberg, the two had conversations involving Wi-Fi routers with secure ‘guest’ network access to any passersby. But back then, Apple’s foothold on the tech industry was dwarfed by the likes of Microsoft, Nokia and Sony so such a large endeavor was relegated to sci-fi daydreams for CEOs like Jobs.

Fast forward 14 years later and not only has Apple come to realize Jobs’ vision but has also been joined by fellow trillion dollar tech behemoth Amazon. Within only a few months of each other, both Amazon and Apple have announced and released updates allowing their respective customers to track and share data by leveraging the hundreds of millions of devices already deployed. It’s difficult not to pigeonhole two trillion dollar companies like Apple and Amazon into the same space, but there are some notable differences in their motives and approaches.

By using their billion+ installed customer user base of iPhones, Apple has created a worldwide wireless mesh network that can be used to track any item using their $29 coin-sized AirTags. The sheer density of iOS devices (particularly in the U.S. where Apple enjoys a 50% marketshare of all smartphones) ensures that even the limited range of BLE (Bluetooth Low Energy) AirTags will be picked even up by iPhones passing by briefly. The identified AirTag’s location is then reported back to Apple’s ‘Find My’ network using anonymized privacy differential data. No individual Apple user is ever identified on either side of the network communication.

On the other side of the mesh data tracking coin we have Amazon’s Sidewalk network which is comprised of their hundreds of millions of Echo smart speakers, Ring doorbells, various IoT camera systems in use by customers. Amazon’s Sidewalk Privacy and Security Whitepaper goes on to describe not only the sharing of location data for devices such as Tile’s tracking device network but even Wi-Fi bandwidth itself. Like Apple, personal user data is all anonymized with latency minimized and data caps to avoid neighborhood Wi-Fi bandwidth hogs. Free Wi-Fi for all sounds downright utopian but as they say, the devil is in the details.

Cynicism once reserved only for big government has now infected the minds of even the most loyal customers of these titan tech companies. Due to their overwhelming influence upon our daily lives, consumers and citizens worldwide cannot help but feel helpless and subjugated to the whims of tech billionaires busy readying their own launchpads set to blast off to other worlds – at least that’s what it feels like to some of us here back on Earth. After all, most of our collective fears are not based on reality as much as our own feelings.

The truth is that not all billionaires are the same just like not all tech companies are created equal. When Apple recently introduced an app tracking dialog box asking users if they would allow Facebook to track their activity across the internet, a whopping 96% of users made a choice to opt out. This speaks volumes not only to how people feel about privacy and tracking but also the way people feel about companies like Facebook. Amazon has faced similar backlash. Overnight, thousands of websites and videos have popped up explaining how to opt out of Amazon’s Sidewalk network. Years of allegations of spying upon users in order to maximize profits have led many towards distrust of companies like Amazon, Google and Facebook. After all, if we just look at profit motives, it’s clear that these companies can only sustain their revenues by continuing to work closely with advertisers who want to know as much about every customer as possible.

Meanwhile, Apple has seemingly set themselves apart from these tech violators by continuing to bang on the privacy drum for all to hear while quietly playing the data didgeridoo. Apple looks the other way when their device data is used to persecute Uyghur Muslims in China. Apple is also paid between $8 billion and $12 billion by Google to make their monopolistic search engine the default on all iPhones. Apple also created the AirTag and ‘Find My’ networks as Opt Out services only. They never gave users the choice to Opt In and therein lies the heart of the problem.

In order for mesh networks to function properly, they must maintain a critical mass of individual nodes. Similar to the concept of herd immunity, mesh networks must reach a saturation point of roughly 70% to 85%, otherwise there will be too many holes in the coverage making  the network unusable to most and defeating the entire effort. In order to ensure this critical mass of active devices, tech companies wager that most users are too uninformed to care or just too lazy to turn off their participation in these vast mesh networks. They are not wrong in their assumptions, only their intentions.

Some argue that the privacy and security dangers are only theoretical or that we are worrying over little to nothing. however, looking back into recent history we see that it only takes a few technology links to build a chain that violates our rights and steals our data. We’ve seen this play out with China’s social credit system that uses networks of cameras and facial recognition to strip citizens of their basic human freedoms. We’ve also seen the proliferation of ransomware attacks on our private data since the advent of Bitcoin and other cryptocurrencies so it’s not difficult to imagine hackers breaching a centralized network comprised of billions of users and infecting or extorting them using targeted malware attacks.

If tech companies want to build trust with consumers and ensure privacy and security are built into all of their products and services, they need to start by offering only Opt-In. When consumers are informed up front and given choices over their own data, the results benefit everyone, not just the company.