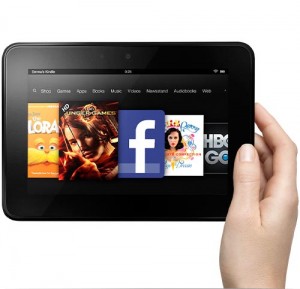 Amidst a slew of new hardware announcements this past Thursday, Amazon managed to slip in an interesting clue as to the ultimate destination for 4G broadband. As part of their new $499 Kindle Fire HD’s data plan, Amazon partnered with AT&T to offer an annual 4G plan for budget-minded consumers. Only $50 for a full year of 4G LTE with one little caveat, a 250MB month bandwidth cap. Anyone who’s ever streamed a movie knows that this paltry 250MB cap wouldn’t get you past the opening credits on some movies.

Now there are a lot of ways to interpret this. Perhaps AT&T and Amazon agree that AT&T’s nascent 4G network couldn’t withstand another hit as big as the 5GB cap (Apple’s iPad’s highest monthly data cap from AT&T). Or perhaps, it’s just Amazon’s quest to get their portable tablets into the hands of as many consumers as possible. The cynic in me might vote for a third motivation; AT&T stands to gain a giant chunk of change from all those overage charges from the poor souls who couldn’t put down their Kindle Fires halfway through the Hunger Games when they hit that 4G data cap limit.

But I believe there is another stronger motivation behind Amazon’s decision. Jeff Bezos revealed a simple text slide during his presentation titled the Amazon Doctrine – Above all else, align with customers. Win when they win. Win only when they win.

This customer-centric approach applies to much more than sexy, sought after hardware from the likes of an Apple. It is the ultimate realization that Amazon is in the content business, content is king and the king will arrive on a red carpet rolling out 4G LTE. By partnering with AT&T and capping data usage so heavily, Amazon is actually tailoring this device to be a portable 4G consumption tablet in ways that iPad, Galaxy Tab and soon-to-be released Windows Touch tablets don’t even stride for. For only 50 bucks a year, you cannot stream all the movies and music you want but you can check your email, launch facebook, browse the web and most importantly, shop on Amazon.com. This, coupled with Amazon’s ad supported models on all their tablet and e-reader offerings ensure a busy shopping season from literally anywhere in the country. The content itself can be easily streamed once the customer gets back home within Wi-Fi range at their home or office. By then, Amazon has already made the sale and has moved onto the next shopping experience.